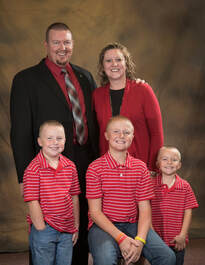 Adam McGeorge was born in Wagga Wagga, New South Wales, Australia, into the Christian home of John and Janette McGeorge. He was raised in Baptist Churches, and made a profession of faith at age 6.
During his teenage years Adam knew he was unsaved and, while knowing Christianity was true, wanted to see what the world had to offer. While attending Hillcrest Christian College, Thomas Howard, son of Missionary to Australia, Robert Howard, invited Adam to come to Anchor Baptist Church on Sunday Morning. Adam and his parents went that following Sunday and he and his parents enjoyed the preaching of Bro. Howard.
The McGeorge’s went several months to Sunday Morning services at Anchor Baptist Church, and it was under the preaching of the Word of God from Revelation Chapter 20 one Sunday morning that Adam fell under immense conviction of the Holy Spirit. That evening before going to bed, after being under conviction all afternoon, Adam repented of his sin and placed his Faith in the Lord Jesus Christ to be his personal Saviour. The day was March 5th 1995 and Adam was 15 years old.
Adam was Scripturally Baptized the 26th of October 1997 and added to the membership of Robina Baptist Church, his first New Testament Independent Baptist Church. January 1998 at his last youth camp, Adam completely surrendered his life to do the will of God, whatever that might be. Bro Howard began discipleship classes with Adam and he started to take on responsibilities in the Local Church of Treasurer, Usher and doing small devotions during the Sunday morning service. During this time Adam started to consider the idea of going to Bible College. As soon as he’d completed the Bachelor of Applied Science in Wildlife Biology degree from Griffith University, Adam was enrolled at Heartland Baptist Bible College for the Spring of 2001 and on his way to the USA under the sponsorship of Bro Howard. At Heartland the Lord directed Adam into the Ministry.
In the spring of 2001 on the 20th of April, Adam was in Missions Class at Heartland Baptist Bible College learning about the Pacific Islands. One of these countries, the Republic of Nauru, stuck in his mind.

Through much prayer, study, and leadership of the Holy Spirit, 6 months later at the Bible Baptist Church of Stillwater Men’s Advance on the 20th of October, Adam surrendered to God’s call upon his life to be a missionary to the Pacific Island of Nauru. Adam made public his call to Nauru that Sunday the 21st of October 2001 at Southwest Baptist Church of Oklahoma City.
Adam and Christina were Married 21st of May 2004, after which Adam became the Missions Intern at Whittier Lane Baptist Church. They were blessed with the gift of Elijah John McGeorge on the 11th of March 2006, and started deputation in April.

Richard & Lesley Crotts III - Papua New Guinea
Richard was born January 20th, 1995. When he was ten years old his Family became missionaries in Papua New Guinea. At the age of 17 he surrendered to be a Missionary to Papua New Guinea. When he turned 21 Richard returned to PNG to attend Islands Baptist Bible College and begin his training for full time ministry.
Richard returned to the United States two and a half years later and traveled with his grandparents while they were on furlough. During this time Richard met Lesley, they were engaged February 14th, 2019. Richard returned to Papua New Guinea for another eight months of studies. He returned to the States and began working at Shawnee Mission Baptist Temple December 1st, 2019. Richard And Lesley were married on January 10th, 2020.
Richard and Lesley are currently serving together at Shawnee Mission Baptist Temple as the Lord prepares them for the mission field.